CLEVELAND, Ohio – Approaching the end of another summer marked by a substantial algal bloom in Lake Erie’s western basin, environmental and conservation groups released separate reports Tuesday that came to the same conclusion:

Ohio, Michigan and Ontario are falling far short in their efforts to reduce and eliminate the seasonal menace.

“The longer we wait to start putting algae-causing, pollution-reduction measures into practice, the worse the problems will become,” said Kristy Meyer, vice president of policy for the Ohio Environmental Council.

Meyer was responding to a new report released Tuesday, “Rescuing Lake Erie: An Assessment of Progress,” that examines how Ohio, Michigan and Ontario are responding to the goals of the Great Lakes Water Quality Agreement they signed two years ago.

The agreement committed the states and Canadian province to reduce phosphorus discharges by 40 percent between 2015 and 2025. In 2008, Ohio released 1,400 metric tons of phosphorus into Lake Erie. A 40 percent reduction would be about 860 metric tons of phosphorus, or roughly the same amount as released in 2010. Gov. John Kasich and the other group leaders are scheduled to meet next week at the 2017 Leadership Summit in Detroit.

END_OF_DOCUMENT_TOKEN_TO_BE_REPLACED 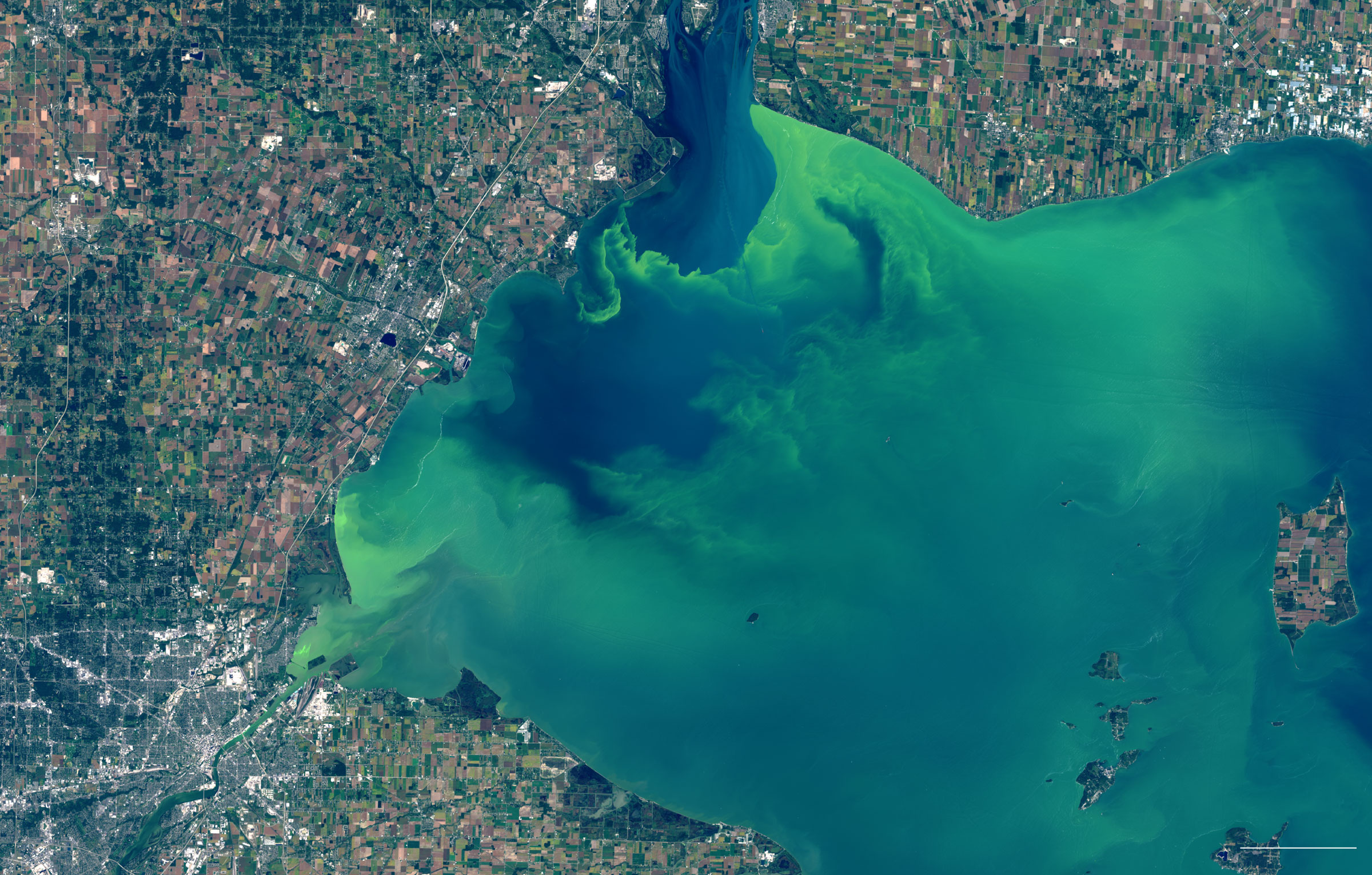 Scientists say that algae blooms have been a growing problem for Lake Erie since the 2000s, mostly because of the extensive use of fertilizer on the region’s farmland.

The algae blooms contain cyanobacteria, which, under certain conditions, can produce toxins that contaminate drinking water and cause harm to the local ecosystem.

During last week’s bloom, the amount of toxins in the algae remained low at the intake points where towns draw water from the lake, according to officials.

END_OF_DOCUMENT_TOKEN_TO_BE_REPLACED

Toledo Mayor Paula Hicks-Hudson reversed course Tuesday and announced she would support the effort to get Lake Erie’s western basin declared impaired because of excessive algae.

The mayor made the announcement in Middlegrounds Metropark on the banks of the Maumee River, which was a blend of dark and near-florescent green.

The Toledo Lucas County Health Department issued a recreational public health advisory because of an algal bloom on the river in downtown Toledo. Two test results Saturday showed 1.8 and 11.8 parts per billion of microcystin in raw river water, both below the 20 ppb threshold the World Health Organization uses for avoiding all contact. City tap water, which is pulled from Lake Erie, was still safe to drink, officials said.

The bloom extended from the Anthony Wayne Bridge to Cullen Park, and advisory signs were posted at various access points. 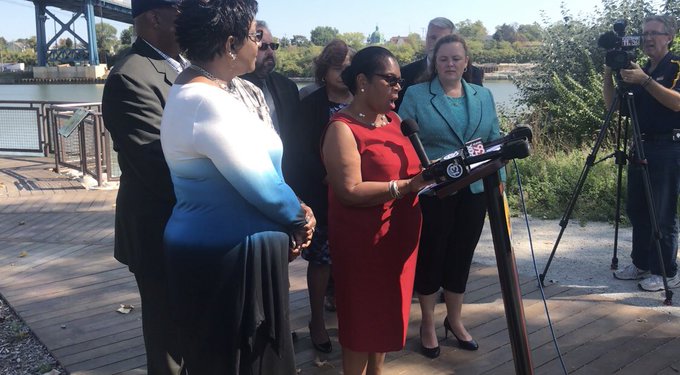 END_OF_DOCUMENT_TOKEN_TO_BE_REPLACED

While the algae bloom on Lake Erie continues to thrive in this warm weather, the scene along the Maumee River in downtown is looking worse.

Dr. Timothy Davis, associate professor of Biology with Bowling Green State University, has studied algae blooms all across the Midwest and even in Australia.

He said exactly like the bloom on Lake Erie, the bloom on the river is caused by the same factors: Excessive Nutrients, warm temperatures, and still water.

And with the current late September heat wave, as the river temperature has risen 23 – 25 degrees Fahrenheit and a dry spell that has completely slowed the Maumee flow down, it was a perfect storm for this bloom to grow.
When asked if the current dredging of the river could also be a factor, Davis said while it could have stirred up additional nutrients from the riverbed, there is no data to connect the dredging with the algae growth.

He said the bloom should be flushed out with a significant rain event.  And that once in the Lake, this river algae will not make the current Lake algae bloom any worse.

“The bloom in the western part of Lake Erie is so large and so massive, that even though we’ve seen the bloom in the Maumee, and that is somewhat rare or rarer that what we see out in the lake, it’s likely not going to impact,” Davis said.

And with microcystin levels above the recreational threshold, there won’t be many people swimming in the Maumee. But plenty of geese and other water fowl will be around the river.
Davis said prolonged exposure to the toxic algae could be dangerous to these animals, especially if they’re swimming in the more dense areas of algae scum.

But Davis said the fish population should be fine, as they swim through or under the algae. He also said eating fish caught in the river shouldn’t pose a threat to people.

The biggest threat to fish in the river is if the large algae bloom deoxygenated the water, but even then fish usually detect the low oxygen and move along.

Three years later, scientists are taking action to stay a step ahead of the harmful blooms, monitoring the algae and bacteria from outer space, from land, and in the water, with a new arsenal of high-tech tools and research projects.

END_OF_DOCUMENT_TOKEN_TO_BE_REPLACED

The EPA has released a scathing new report that finds Lake Erie is in “poor shape” when it comes to the other Great Lakes.

So what does that mean for people living in Northeast Ohio?

Channel 3 News inquired about the safety of drinking water, beaches and fish consumption.

According to the EPA, drinking water quality remains “good” and “unchanging” so long as it continues to be treated.

END_OF_DOCUMENT_TOKEN_TO_BE_REPLACED

Toledo, Ohio — Ohio’s environmental regulators who have pledged to drastically cut what’s feeding the harmful algae in Lake Erie will consolidate oversight of the work to make sure money is being well spent and research isn’t overlapping.

The proposal brought by Gov. John Kasich’s administration and approved by the legislature last week will put the Ohio Lake Erie Commission in charge of seeing that the state reaches its goal of a 40 percent reduction of phosphorus going into western Lake Erie within the next 10 years.

Both Michigan and the Canadian province of Ontario have pledged to make the same reduction, which researchers say will go a long way to improving water quality.

END_OF_DOCUMENT_TOKEN_TO_BE_REPLACED

LANSING, MI — On the cusp of what’s expected to be another sizable summer algae bloom in Lake Erie, the state of Michigan has released a plan for improving the lake that critics say doesn’t do enough to reduce nutrient-laden runoff from farms.

The state calls the 23-page Domestic Action Plan for Lake Erie released June 13 a roadmap to help Michigan meet its joint pledge with Ohio and Canada to reduce phosphorus entering the lake by 40 percent over the next eight years.

Phosphorus runoff from farms, sewage plants and other sources of nutrient pollution is fueling disgusting and dangerous algae growth in the lake’s western end each summer. A toxin inside the blue-green algae can cause rashes, nausea, headaches and organ damage.

Michigan is one of several states in the lake’s watershed issuing action plans the U.S. Environmental Protection Agency expects to roll into a broader strategy to curb the harmful algal blooms, which turn the water green, slimy and toxic.

The 2012 Great Lakes Water Quality Agreement between the U.S. and Canada requires national plans be completed by February 2018. Ohio, which has the most land in the western basin watershed and the most coastline impacted by the annual blooms, is expecting to release its plan in October.

END_OF_DOCUMENT_TOKEN_TO_BE_REPLACED 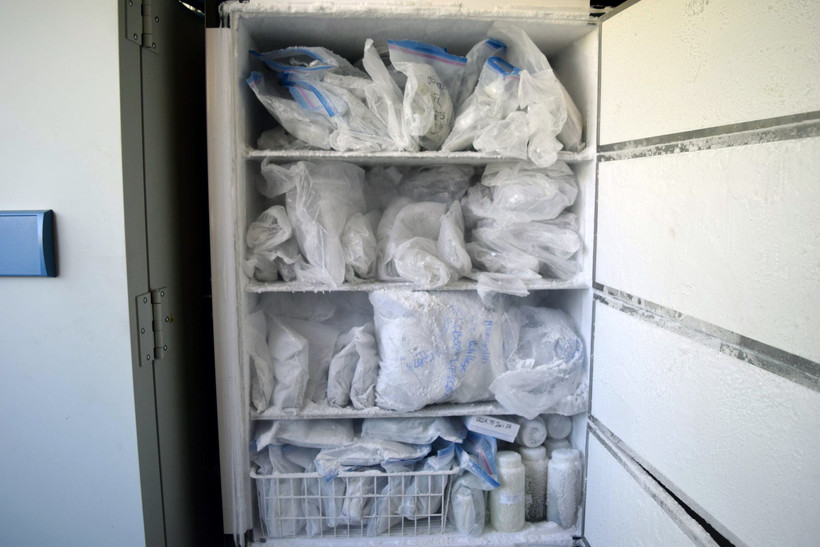 OSU researchers use the walleye in this freezer to test for microcystin, a toxin produced by blue-green algae.  Elizabeth Miller/ideastream

A lot of attention has focused on President Donald Trump’s proposal to eliminate funding for the Great Lakes Restoration Initiative, which doles out $300 million a year for various projects. But his “skinny budget” has other cuts — including the National Sea Grant program — that would also affect the region.